I was an Extra in a Christmas Movie 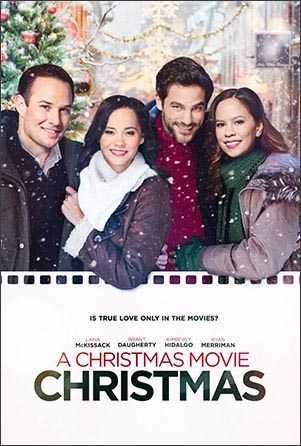 It all started when my friend sent me a newspaper article about
a Christmas movie filming in the nearby town of Frankenmuth, Michigan
that needed extras to mill around in the background!

Frankenmuth is the CHRISTMASIEST town on earth
with holiday lights and finery dazzling all through the quaint Bavarian village.

I have photographed there many times! 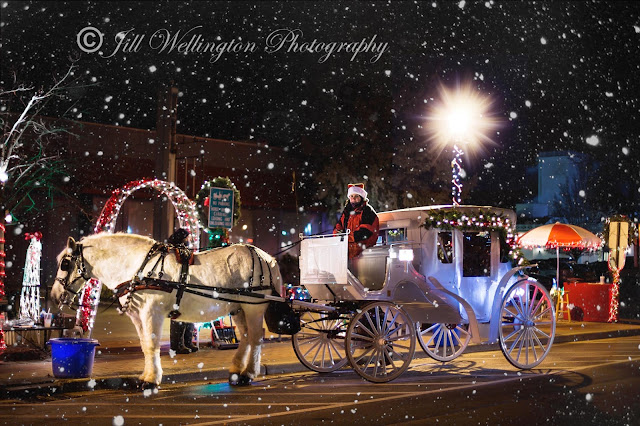 It's also home to Bronner's Christmas Wonderland,
the largest Christmas store in the world! 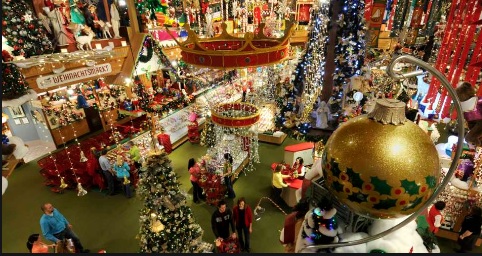 I knew it was the perfect backdrop for a Christmas movie,
and I wanted to be in that backdrop!

I immediately followed instructions in the article and sent off
an email to the casting company.

I was excited actor Brant Daughtery from my hometown of Cincinnati
and his then-fiance Kim Hidalgo (They're married now!)
were starring in the movie! 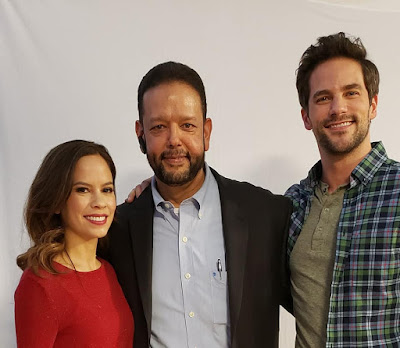 Within minutes, I heard back from a woman named Tessa
saying she would be sending the schedule soon!
I guessed I was IN!

I never got the schedule or heard from Tessa again.
BUMMER!

Meanwhile, the movie was busy filming in frigid March
so close to my home with locals as extras!

I couldn't miss this chance to experience the
making of a Christmas movie so,
I drove to Frankenmuth on one of the last shooting dates
and poked around town for a film crew.

Really, I just wanted to witness the making of a holiday movie
because I am an avid fan!

I carefully dressed in a red sweater, with a red and white striped hat and scarf set.
I figured if I looked Christmasy, they may let me in the film!

My heart started to pitter-patter when I rounded a corner and saw people
strewing quilt batting on trees and sidewalks to look like snow. 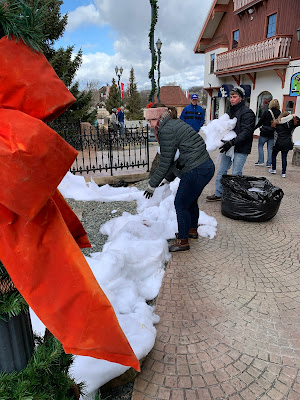 Then I saw men hauling what looked like film equipment! 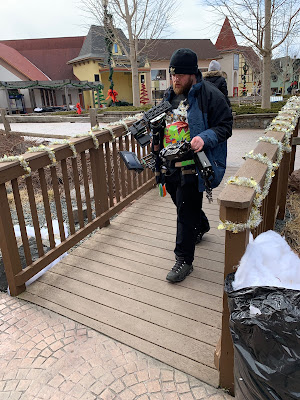 I clicked off photos as fast as I could figuring
they would soon realize I did not belong there
and kick me out.

OMG!  I will, at least, get to see the production from
behind-the-scenes!

After snapping photos of the exciting set-up,
and still not kicked-out... 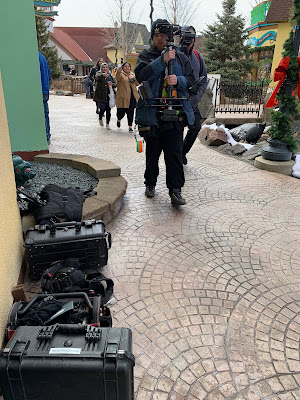 I turned around and right there...across that little wooden bridge... 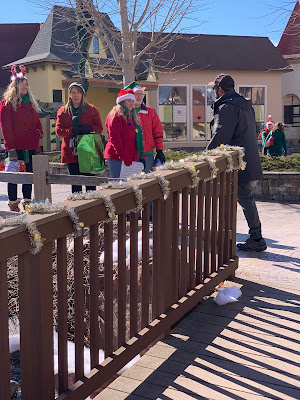 Look closely at that wooden bridge because that becomes
important later.

I rushed across the structure and started photographing those
EXTRA STARS,
all aglow in their Christmas duds.

They were led by their own "extras director"
"Hi, my name is Ryan!" he shouted.

I recorded Ryan on my phone showing the
extras exactly where to walk and how to space themselves. 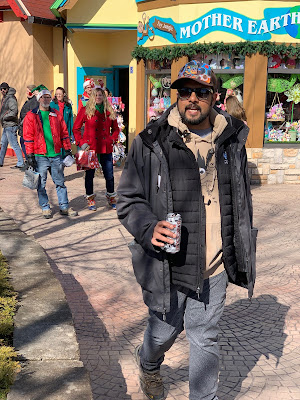 I was starting to feel like one of THEM...
I was barging in and was right THERE
walking next to Ryan the king of the EXTRAS!

That's when my mouth opened and the words spilled out:

Me:  Ryan, do you need an extra EXTRA?

He sized me up in my Christmas hat and scarf :

Ryan:  You certainly look the part!  Yes!  We'd love to have you join us!

I was whisked off to a building to fill out paperwork.

Guess who was at the table? 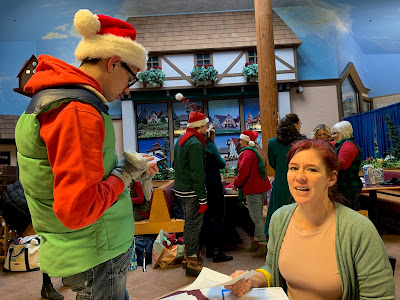 I didn't remind Tessa she never emailed me back or
say, "See, Tessa...I AM in this movie!"

Turns out Tessa was SO nice and friendly and helpful.

Lots of colorful Christmas characters...
all from my local area milled about,
excited and overjoyed to be a part of it all! 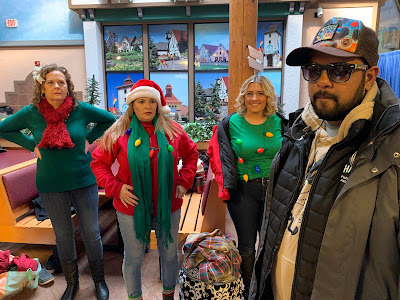 They lined us up and took photos of all our outfits
and to identify everyone.

We bonded over the fun of Christmas
and this new experience!

(I'm on the far right in my strategic striped hat and scarf!)
Who WOULDN'T want me in a Christmas movie...ho! ho! 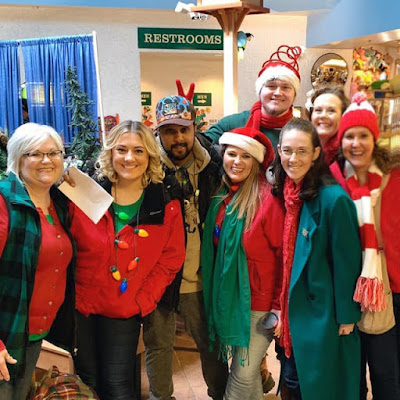 Then it was time to start filming.

Tessa made me remove my coat because it was black and
they wanted Christmas colors on everyone.

UGH...actors must suffer for their craft.
It was 35 degrees out there!

I was paired up with a lovely young gal named Devin
who had already filmed for four days,
so she was an expert and knew the ropes. 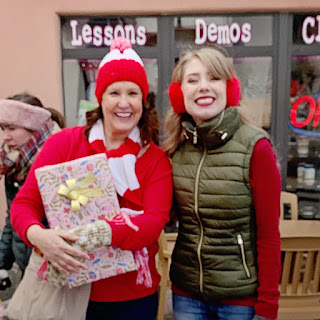 Devin told me to never look at the camera and to walk slowly
and follow the exact path laid out by Ryan
when they practiced earlier.

We practiced walking in a large figure-eight pattern
which eventually crossed the wooden bridge.

They cued the extras to begin walking,
then a few moments later, cued the actors to start action. 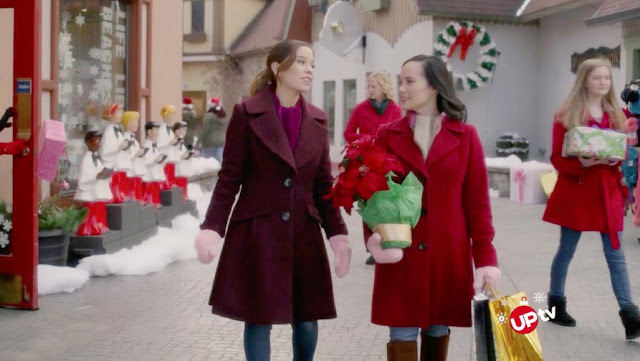 I noticed that the action cue happened right as Devin and I
were passing behind the actors on the wood bridge.

After a few takes, a woman ran out of a building and gave me a large
present to carry.

I KNEW if they didn't cut that scene, Devin and I would be in it!

Three  hours later, dizzy from walking in that figure-8 and
pretty much frozen, my acting role
was complete.
But, it was worth the winter chill!

Eight months later, I sat on my cozy couch
watching "Christmas Movie Christmas" and when
the actor's crossed the wooden bridge...
sure enough...
there I was with Devin, and my big present! 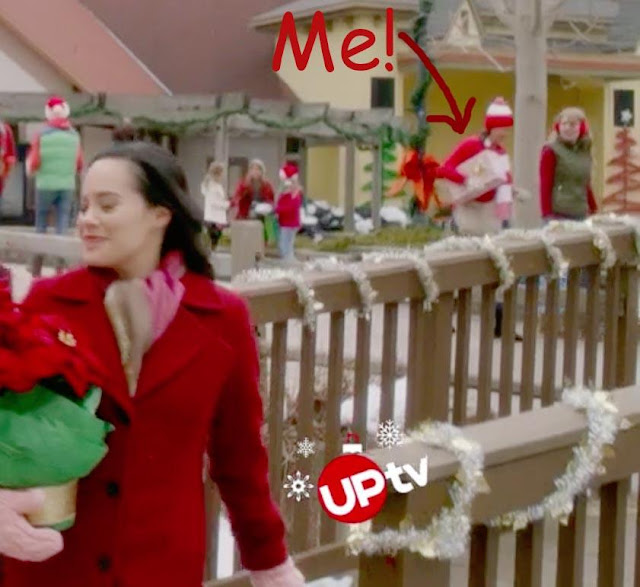 I also showed up as a red blob in the background
of a later scene. 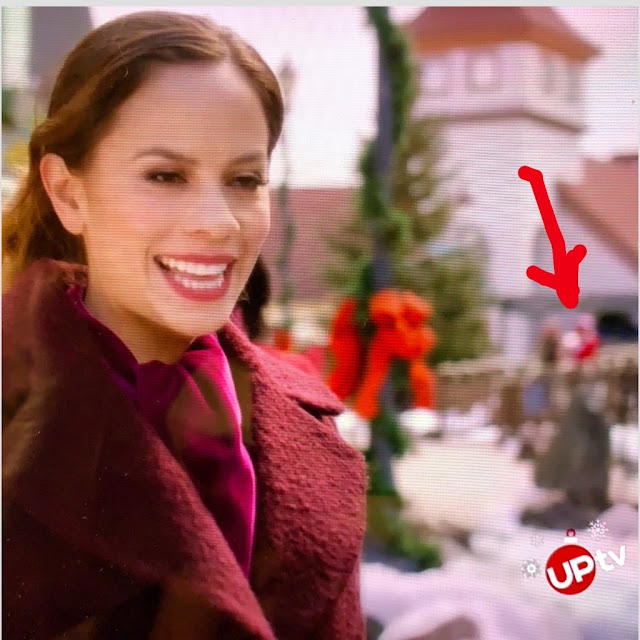 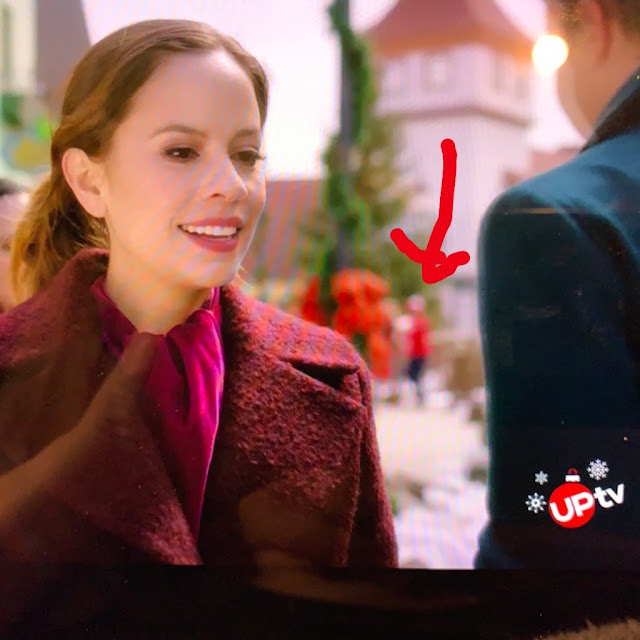 I am so proud of Frankenmuth and all they put into
CHRISTMAS! 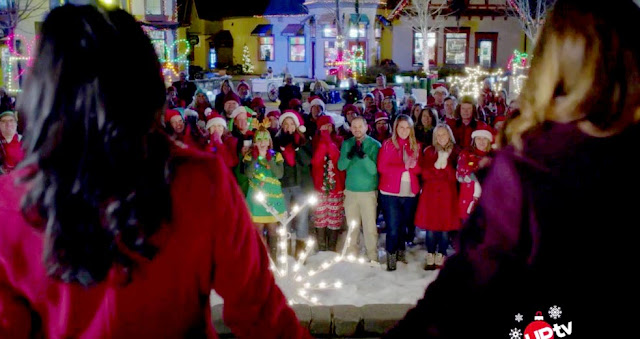 And, to all the extras who brought the movie to life!

These are my friends and neighbors! 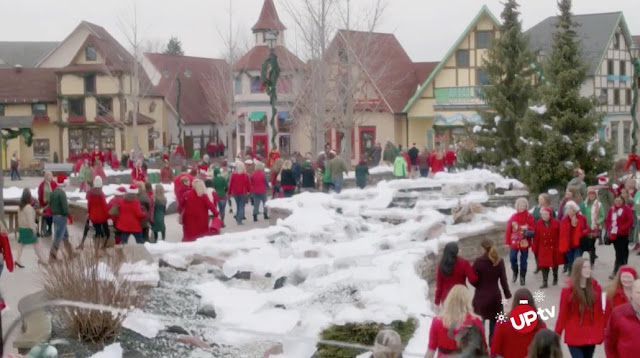 The movie is airing on the UPtv network during this
holiday season (2019)
Keep an eye peeled for the wooden bridge and flash of red in the background!

Hollywood:  We have a role for a red blob in the background...